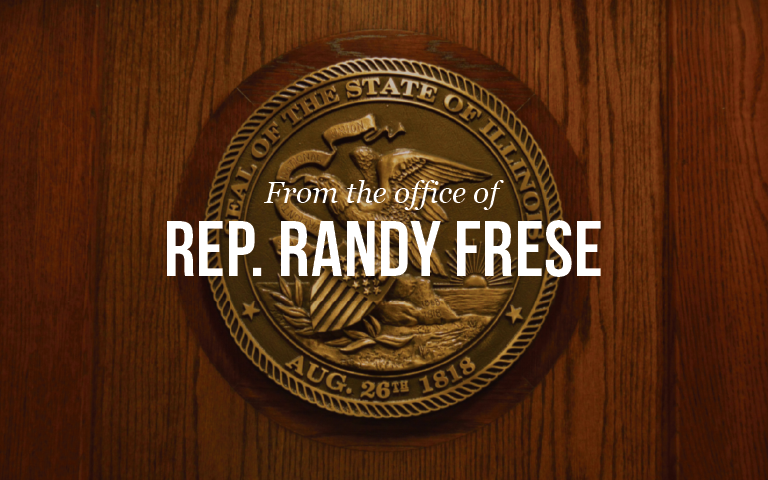 Illinois was one of the first states in the nation to report a confirmed coronavirus case, back in January, and Illinois was also among the first locations of a human-to-human transmission. On March 12 Governor Pritzker issued the first proclamation declaring that the coronavirus outbreak was a disaster in Illinois. The next day, schools were ordered closed, and a week later the first of a series of stay-at-home orders was issued.

As the first days of quarantine went by businesses deemed “non-essential” were closed down and large gatherings were prohibited. But as the shutdown dragged on, stark contrasts emerged between different areas of the state: 90 percent of positive cases were in the Chicago area, but businesses remained shut down in our local communities as well.

Rep. Frese joined with other downstate legislators to call for a regionalized reopening plan that took into account the different conditions in different areas of the state. He also called for an end to government-by-executive order, and contacted the Governor to share the stories of local small business owners who were struggling as well as innovative ways to safely re-open.

As conditions around the state improved, we finally began to see a gradual lifting of the stay-at-home orders starting at the end of May. We are currently in Phase 4 of the Governor’s reopening plan. Rep. Frese said the next challenge will be to move our communities forward into Phase 5 complete reopening, which the Governor has proclaimed likely won’t happen until an effective vaccine is widely available.

“Our local communities can’t wait months, or possibly even years to completely reopen our businesses, schools and other necessities. I will continue to work for a regional reopening approach that will allow full reopening, and real recovery,” Rep. Frese said.

Governor Pritzker this summer resurrected plans to make Illinois small business owners subject to criminal charges and fines for violating his Coronavirus restrictions in their own establishments. In response, State Representative Brad Halbrook said the General Assembly must weigh in, and demanded the Governor call legislators back to Springfield in Special Session.

The Governor’s resurrected rules approved by the Democrat majority on the Joint Committee on Administrative Rules will make business owners in our communities subject to a Class A Misdemeanor and fines up to $1,200 for violations of face covering and social distancing mandates within their establishments.

“Business owners throughout the State, after having their doors forcibly closed by government for months, are doing everything in their power to keep their establishments above water.  We need an immediate Special Session to address the Governor’s new business penalties,” Rep. Frese said.

In an abbreviated 4-day May session, the majority party in the House and Senate pushed through a new state budget plan that increases state spending and debt in the midst of an economic crisis. Representative Frese voted no.

“At a time when we need to work together more than ever to get through a crisis, Speaker Madigan today shut out all Republican budget ideas and pushed through a new 2021 spending plan that burdens our struggling families and businesses with more spending and debt. To add insult to injury, when record numbers of Illinois workers are unemployed, Madigan and House Democrats actually voted today to raise their own pay! Illinois workers and businesses are fighting for survival. This budget is simply shameful,” Rep. Frese said.

This spring Rep. Frese introduced a pair of bills to benefit the Illinois Veterans Home in Quincy.

House Bill 3250 would create an income tax checkoff for contributions to a qualified veterans home fund, including the Quincy Veterans Home Fund.

House Bill 5052 would authorizes the Secretary of State to create the Illinois Veterans’ Home in Quincy Foundation. Funds collected by the Foundation would be used for private partnership projects supporting renovations to the Veterans Home in Quincy campus, Dudley House, and domiciliary buildings.

Both bills were stalled in the House Committee process during this year’s abbreviated Spring session, but will continue to be a priority for Rep. Frese.